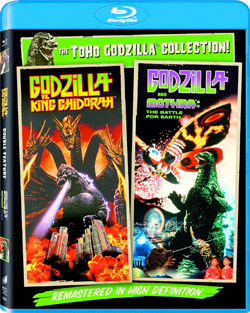 Beginning with the introduction of the original Godzilla film in 1954, and continuing through today, the King of the Monsters has entertained generations of movie fans through his big-screen adventures.Â  In celebration of the 60th Anniversary of the iconic franchise, Sony Pictures Home Entertainment will debut four classic Toho Godzilla Double Features for the first time on Blu-Ray Disk in May.

Each double feature is available separately and features unique cover artwork across the series. Fans will also be pleased to hear that each release will also include the Original Theatrical Trailers and Teasers from the series.

All of the Godzilla Double-Features will also include Digital HD UltraViolet version and arrive in stores on May 6.