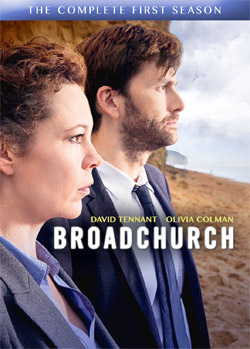 Entertainment One has just announced the acclaimed British TV drama Broadchurch: Season One for release here in the US in April.

Set in contemporary times in the Dorset seaside town of Broadchurch, the mystery begins when the body of 11-year-old Danny Latimer is found on a popular beach just before the onslaught of tourist season.  Through eight gripping episodes that will leave your insides twisted into knots, two deliciously dueling detectives (Olivia Colman and David Tennant) are brought together by circumstances to solve the murder.  Under the glare of an increasing media spotlight, the two race to find the killer amid the devastated townspeople struggling to keep their close-knit community together while bracing for secrets that will be laid bare.

Featuring all eight episodes of the gripping mystery hit series from the BBC, the release will also include the Featurette “Broadchurch: Behind the Scenes” and Deleted Scenes.