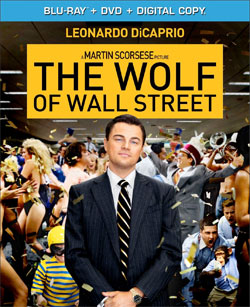 Martin Scorsese‘s latest movie, “The Wolf of Wall Street” has received a street date, as Paramount Home Entertainment will release the film on DVD and Blu-Ray Disc in March.

Leonardo DiCaprio earned a Golden Globe® for his portrayal of a young stockbroker hungry for a life of non-stop thrills, where corruption is king and more is never enough.Â  Based on an outrageous true story of American excess, “The wolf of Wall Street” is a star-studded film starring Matthew McConaughey, Kyle Chandler and Rob Reiner.

The DVD version will be a bare-bones release, offering up only the movie itself with a Dolby Digital 5.1 audio track.

The Blu-Ray version will feature a 1080p high definition transfer of the film with English 5.1 DTS-HD Master Audio. In addition, it will also contain the Featurette “The Wolf Pack”, in which director Martin Scorsese, actors Leonardo DiCaprio, Jonah Hill and other cast and crew discuss the incredible journey of making the film.Â  Follow them as they reveal the real story behind Jordan Belfort‘s rise to power and how they depicted his world of lavish excess, perseverance and ultimately betrayal.