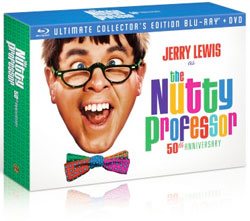 The title‘s eponymous professor is Julius F. Kelp (Jerry Lewis), a shy, bumbling chemistry teacher who has a mad crush on his student Stella Purdy (Stella Stevens). When he tires of being made fun of, Kelp develops a magic potion that turns him into smooth and smarmy nightclub singer Buddy Love. Stella is drawn to Buddy but unfortunately, the potion‘s formula is unstable and Buddy keeps slipping back into Julius at the most embarrassing moments. In the end the professor‘s ploy is revealed, but not before he delivers a speech calling for everyone to learn to love themselves first before others can return the favor. Stella realizes she loves him for who he is and, needless to say, the ending is a happy one.

Lewis directed, stars in, and co-wrote (with Bill Richmond) the parody of the classic “Dr. Jekyll and Mr. Hyde” tale that will arrive as a four-disc Collector‘s Edition with personal input from Mr. Lewis, who has helped compile lots of entertaining extra content for this release. Highlights include a new featurette, Jerry Lewis: No Apologies, an intimate look at “The King of Comedy”; a 48-page Book of the film‘s Original Story Boards; a 44-page book of excerpts from Jerry’s Cutting Script with Personal Notes; and a recreated “Being a Person” book, written by Jerry exclusively for the film‘s crew. Adding to the offering is the very funny CD collection, Phoney Phone Calls, 1959-1972, with private prank calls secretly recorded by Lewis during those years.

“The Nutty Professor 50th Anniversary Collector‘s Edition” will include the film in DVD format as well as Blu-Ray Disc, along with DVD versions of two other well-known Lewis comedies, Cinderfella and The Errand Boy.

Packed with more extras than you can shake a stick at, the release will also include Commentary Tracks for all three movies, Deleted Scenes, Bloopers, Gag Reel and countless other bonus features.

“The Nutty Professor 50th Anniversary Collector‘s Edition” will be available on June 3 for $54.99.