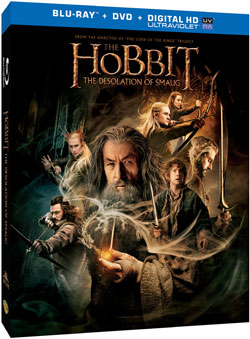 Warner Home Video has just announced the upcoming release of The Hobbit: The Desolation of Smaug, the second installment in Peter Jackson‘s trilogy, scheduling the film for release on DVD and Blu-Ray Disc in April.

“The Hobbit: The Desolation of Smaug” continues the adventure of the title character Bilbo Baggins as he journeys with the Wizard Gandalf and thirteen Dwarves, led by Thorin Oakenshield, on an epic quest to reclaim the Lonely Mountain and the lost Dwarf Kingdom of Erebor.

Â
Having survived the beginning of their unexpected journey, the Company travels East, encountering along the way skin-changer Beorn and a swarm of giant Spiders in the treacherous forest of Mirkwood. After escaping capture by the dangerous Wood-elves, the Dwarves journey to Lake-town, and finally to the Lonely Mountain itself, where they must face the greatest danger of all”“a creature more terrifying than any other; one which will test not only the depth of their courage but the limits of their friendship and the wisdom of the journey itself”“The Dragon Smaug.

All versions include a digital version of the movie on Digital HD with UltraViolet.

The releases will also contain a number of Featurettes, such as Peter Jackson Invites You to the Set: In the Company of the Hobbit and Peter Jackson Invites You to the Set: All in a Day‘s Work, allowing you to experience the film‘s challenges and demands, and journey alongside the director into Mirkwood, Lake-town and Dale as the movie‘s most intense, pivotal scenes are created.

Also included are Production Videos, giving you the chance to watch production come to life as Peter Jackson gives you an inside look at the making of the film.

New Zealand: Home of Middle-earth, Part 2 is a Travelogue with Peter Jackson and his team across the stunning locations of New Zealand transformed by the filmmakers into Middle-earth.

Also included is the “I See Fire” Music Video, Ed Sheeran‘s beautiful theme song from the film that is illuminated with this intimate music video.