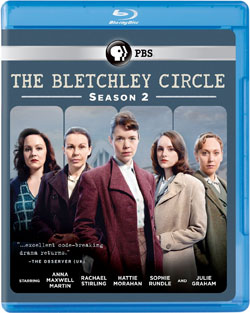 PBS Distribution has just announced it is releasing The Bletchley Circle: Season 2 on DVD and Blu-Ray Disc in April, consisting of two new, feature-length episodes.

Based on the lives of four extraordinary and brilliant women with the ability to break codes, a skill honed during World War II when they worked undercover at Bletchley Park, site of the United Kingdom‘s main decryption establishment, the women use their code-breaking skills to solve crimes in post-war London.

Blood on Their Hands opens with former Bletchley Park girl Alice Merren in prison awaiting trial for the murder of eminent scientist, John Richards. Jean stands behind her innocence and tries to reunite the circle in an attempt to help one of their own. Lucy is now getting on well in a clerical job at Scotland Yard and keeping her head down, and Millie is working as a German translator. Susan is reluctant to get involved after her experience with the twisted serial killer Malcolm Crowley and the danger it posed to her family.

Â
Uncustomed Goods finds Millie branching out into what she believes to be a harmless sideline of dealing in uncustomed goods. This endeavor leads to her being kidnapped and held in a seedy hotel by some gangsters. On discovering this, Alice goes to Jean and Lucy to help. The girls start to investigate in order to save their friend and, as they do so, uncover a much darker, hidden world of crime.

Featuring also Cast Interviews and Featurettes, the release will be available on April 15 for $29.99 on DVD and $34.99 on Blu-Ray Disc.