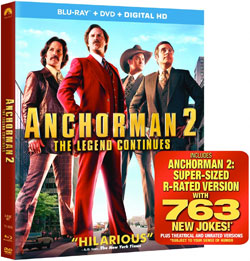 Paramount Home Entertainment has just announced the upcoming release of Anchorman 2: The Legend of Ron Burgundy, bringing the film to DVD and Blu-Ray Disc in April.

After losing his job to his wife and co-anchor, Ron Burgundy (Will Ferrell) reassembles the news team and squares off against a new rival. Will the world’s greatest anchorman be crushed beneath the weight of his own ego (and his salon-quality hair)? Anything goes in the outrageous comedy, starring Will Ferrell, Steve Carell, Paul Rudd and David Koechner, reprising their now iconic roles to take on the 80s and the first 24-hour news channel.

“Anchorman 2” will be available in various incarnations when it makes its way to retail.

The DVD version will feature a widescreen presentation of the theatrical cut of film itself with no bonus materials.

The Blu-Ray Disc on the other hand will be packed with material. Arriving as a 3-disc Combo Pack that contains the theatrical cut, an unrated cut and a super-sized R-rated version with 763 new jokes!

Line-O-Rama, Parts 1 & 2 will also be included, offering non-stop alternate lines from the film. Also included us the Behind-the-Scenes Featurette ”Newsroom”, giving you an inside look at the making of the film.

Welcome to the Dolphin Show is a featurette in which Ron Burgundy takes on the crowd, while Catfight matches up Christina Applegate vs. Meagan Good with hilarious one-liners. In News-O-Rama Ron and the News Team bring you the headlines, while Kench-O-Rama is a mashup of Kench Allenby‘s most Australian moments.

The release also contains a Cast Table Read as well as Anchorman 2: The Musical, a look at the musical sequel that almost was. Clips, such as RV, Baxter & Doby and News Fight cover a variety of moments from the film.

The release also includes Deleted Scenes alongside a selection of Extended & Alternate Scenes and Previsualizations for the RV, Shark Attack and News Fight sequences.

The release is rounded out by Auditions featuring Meagan Good, Dylan Baker and Amy Poehler, Benefit for 826LA, a special tribute to “Anchorman 2” as well as Trailers.

“Anchorman 2: The Legend of Ron Burgundy” will be in stores on April 1 for $29.99 on DVD and $39.99 on Blu-Ray Disc. Note, however that Amazon has the Blu-Ray version on sale currently for less than $20! Make sure to grab a copy while it lasts!