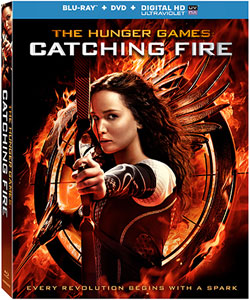 This morning, Lionsgate Home Entertainment has announced the upcoming DVD and Blu-Ray release of The Hunger Games: Catching Fire, scheduling the title for March.

Based on the best-selling second novel of Suzanne Collins‘ award-winning trilogy, with a screenplay by Simon Beaufoy and Michael DeBruyn and directed by Francis Lawrence (I Am Legend), The Hunger Games: Catching Fire begins as, against all odds, Katniss and her fellow tribute Peeta have returned home after surviving The Hunger Games. Winning means they must turn around, leaving their loved ones behind and embark on a “Victory Tour” through the districts. Along the way, Katniss senses a rebellion simmering ”“ one that she and Peeta may have sparked. At the end of the Victory Tour, President Snow announces a deadly 75th Hunger Games that could change Panem forever.

The DVD version of the release will feature an anamorphic widescreen transfer with Dolby Digital 5.1 audio and will also include a Commentary Track with Director Francis Lawrence and Producer Nina Jacobson. It will also contain a selection of Deleted Scenes and a Sneak Peek of Divergent.

The Blu-Ray Combo version will offer up a 1080p high definition transfer with a DTS 7.1 HD Master Audio track. As extras you will also find the Commentary Track with Director Francis Lawrence and Producer Nina Jacobson and the Deleted Scenes on the release, but in addition, it will also contain “Surviving the Game: Making Catching Fire”, a 9-part feature-length documentary.

“Catching Fire” will arrive in stores on March 7 for $29.95 on DVD and $#9.99 as a Blu-Ray combo that contains the high definition version, the DVD version and an UltraViolet Digital HD version of the movie.