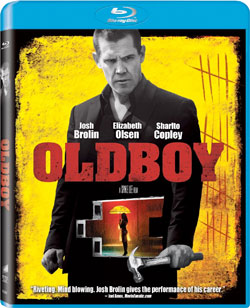 Sony Pictures Home Entertainment has just unveiled details about the upcoming remake of the Korean 2003 cult classic Oldboy, scheduling a DVD and Blu-Ray Disc release of the film in March.

“Oldboy” is a provocative, visceral thriller that follows the story of Joe Doucette (Josh Brolin), a man who is abruptly kidnapped and held hostage for 20 years in solitary confinement, for no apparent reason. When he is suddenly released without explanation, he begins an obsessive mission to find out who imprisoned him, only to discover that the real mystery is why he was set free.

The DVD version will feature an anamorphic widescreen transfer of the film with Dolby Digital 5.1 audio and will also contain Alternate and Extended Scenes as well as a Featurette called “Talking Heads”. The Workout Video Promo will also be included.

The Blu-Ray version will feature a high definition presentation and will include the same bonus materials. In addition, however, it will also contain two additional Featurettes, named “The Making of Oldboy” and “Transformation.”