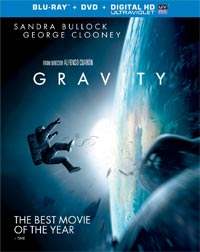 After having received 10 Academy Award nominations last week, Warner Home Video has just announced the upcoming release of Gravity on DVD and Blu-Ray Disc, scheduling the acclaimed movie for February.

Dr. Ryan Stone (Sandra Bullock) is a brilliant medical engineer on her first shuttle mission, with veteran astronaut Matt Kowalski (George Clooney) in command. But on a seemingly routine mission, disaster strikes. The shuttle is destroyed, leaving Stone and Kowalski completely alone””tethered to nothing but each other and spiraling out into the darkness. The deafening silence tells them they have lost any link to Earth… and any chance for rescue. As fear turns to panic, every gulp of air eats away at what little oxygen is left.

But the only way home may be to go further out into the terrifying expanse of space.

The release will be available as a Blu-ray 3D Combo Pack, Blu-ray Combo Pack and a 2-Disc DVD Special Edition, all of which will contain a number of bonus features, such as Collision Point: The Race to Clean Up Space, a featurette narrated by Ed Harris. Also included is Aningaaq, a short film by co-writer JonÃ¡s CuarÃ³n, and the featurette Gravity Mission Control.

You will also find Shot Breakdowns on the release, along with Gravity: Silent Space Version and Sandra‘s Surprise!