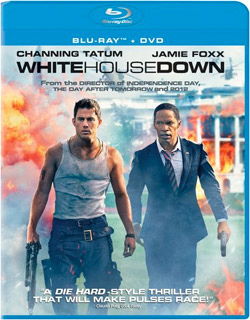 Capitol Policeman John Cale (Channing Tatum) has just been denied his dream job with the Secret Service of protecting President James Sawyer (Jamie Foxx). Not wanting to let down his little girl with the news, he takes her on a tour of the White House, when the complex is overtaken by a heavily armed paramilitary group. Now, with the nation’s government falling into chaos and time running out, it’s up to Cale to save the president, his daughter, and the country.

Beside the feature film, the DVD version will also contain four Featurettes, such as ”A Dynamic Duo,” taking a look at the chemistry between Tatum and Foxx and their dynamic on-screen presence. ”Men Of Action” allows you to discover Tatum‘s willingness and desire to perform his own stunts, as well as the extensive training required, while ”Roland Emmerich: Upping The Ante” offers up a look at Roland Emmerich‘s vision for the film. ”Meet The Insiders” will shine a spotlight on the star-studded supporting cast of the movie.

The Blu-Ray version will contain all of these bonus materials as well, of course, and will further add a Gag Reel to the mix, along with nine additional Featurettes. ”The Beast” is a look at the film‘s presidential limo, better known as The Beast. ”The Full Arsenal” takes a closer look at the Guns, Â Grenades, Tanks and Choppers, while ”VFX Boundaries Down” allows you to discover the technologies that were literally invented by filmmakers, from massive blue screens to virtual sets.

“The Inside Story” uncovers this concept‘s fast-moving rise to the big screen, whereas ”Presidential Treatment” is a look at the size and scope of this massive production.

”Lights, Camera, Heart-Pumping Action” uncovers how filmmakers utilized a unique and stylistic approach to lighting, as well as various filming techniques to capture the true scope of the film‘s immense action.

Then there is ”Crashing The Oval Office” allowing you to see how filmmakers constructed a stunt set then drove an SUV at full speed into the Oval Office. ”Drowning The Beast” analyzes the presidential limo escape, and finally, ”Recreating The White House” gives you a chance to hear from the filmmakers about the meticulous detail that went into replicating the White House.