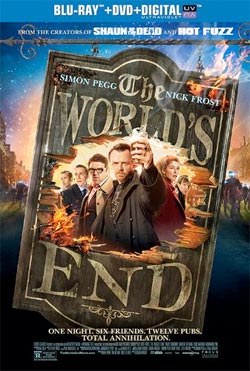 Universal Home Entertainment has just added The World‘s End to their release line-up, scheduling the film for release on DVD and Blu-Ray Disc in November.

Simon Pegg and Nick Frost reteam with director Edgar Wright (Shaun of the Dead, Hot Fuzz) in this wildly entertaining thrill ride.Â  Twenty years after their first epic pub crawl attempt, the “five musketeers” reunite in their home town to complete the ultimate challenge ”“ one night, five friends, twelve bars ”“ a boozy quest on which only the strongest will survive. But after a bizarre series of encounters with the out-of-this-world locals, they soon realize that reaching their final pub, The World‘s End, may be the least of their troubles.Â  They‘re having the time of their lives, ready to take on the world”¦ but tonight they may have to save it.

The DVD version contain a Commentary Track with Screenwriters Edgar Wright and Simon Pegg, as well as the Making-Of Featurette “Completing the Golden Mile”. While on the surface “The World‘s End” looks like a movie about a bunch of old friends getting drunk on a pub crawl, it‘s actually about much more. Â Look through the eyes of these frequent collaborators at the depth of the themes and the relationships between characters.

The Blu-Ray version is loaded with extras, including the commentary track and making-of featurette. In addition, however, yo uwill find a Cast Commentary with stars Simon Pegg, Nick Frost, and Paddy Considine on the release, as well as a Technical Commentary with director Edgar Wright and director of photography Bill Pope.

Filling in the Blanks is a look at the stunts and FX of the movie, as cast and crew discuss the prowess of ”¨“The World‘s End” stunt and VFX teams. Watch rehearsals of intricate fight scenes choreographed by some of the movies‘ best stuntmen. Learn how the VFX team enhances the existing footage to perfect the film‘s look and style.

Further, look for a selection of Deleted Scenes, Outtakes and Alternate Edits, as well as Hair and Make-Up Tests and Rehearsal Footage.

Also included is Stunt Tapes, a behind-the-scenes look at the bathroom fight, the twinbot fight and the beehive fight, as well as VFX Breakdown in which VFX Supervisor Frazer Churchill compares production footage with final shots to take viewers behind the veil of the outrageous visual effects sequences.

There’s Only One Gary King is a mash-up of Gary King‘s (Simon Pegg) best moments, while Signs & Omens offers up a clip montage that highlights all the hidden clues and hints throughout the film.

Then there is The Man Who Would Be (Gary) King another edition of Edgar & Simon’s Flip Chart, in which writers Edgar Wright and Simon Pegg bring back the trusty flip chart to reveal their step-by-step process of creating the story.