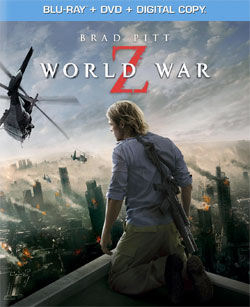 Prepare for the Zombie Apocalypse as Paramount Home Entertainment is readying World War Z for release on Blu-Ray and DVD this fall.

“Wolrd War Z” follows the tense and thrilling developments surrounding a former United Nations investigator (Brad Pitt) as he helps stop the chaotic pandemic that has gripped populations around the world.

“World War Z” will be available on Blu-ray Combo or Blu-ray 3D Combo with an Unrated Cut, packed with even more thrills and action too intense for theaters, along with the Theatrical Version of the film.Â  The combo packs feature UltraViolet and boast in-depth looks at the making of the film, the seamless blending of practical and digital effects, the science behind the Zombie outbreak and much more.Â  The film will also be available as a movie-only single-disc DVD.