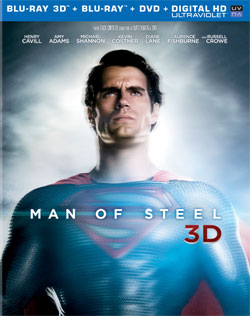 Warner Home Video has unveiled details about the upcoming release of Man Of Steel, scheduling a DVD and Blu-Ray version to hit the streets in November.

In “Man Of Steel,” a young boy learns that he has extraordinary powers and is not of this Earth.Â  As a young man, he journeys to discover where he came from and what he was sent here to do.Â  But the hero in him must emerge if he is to save the world from annihilation and become the symbol of hope for all mankind.

The DVD version will feature the movie itself, along with a number of Featurettes such as ”Strong Characters, Legendary Roles,” which explores the legendary characters of the Superman mythology and how they have evolved in this new iteration of the Superman story.

Also included is “All-Out Action”, allowing you to go inside the intense training regimen that sculpted Henry Cavill into the Man of Steel and Michael Shannon and Antje Traue into his Kyptonian nemeses, and ”Krypton Decoded”, in which Dylan Sprayberry (Clark Kent, age 13) gives the lowdown on all the amazing Krypton tech, weapons and spaceships featured in.

The Blu-Ray versions will contain the same featurettes but further add Journey of Discovery, an immersive feature-length experience that allows you to watch the movie with director Zack Snyder and stars Henry Cavill, Amy Adams, Diane Lane and others as they share the incredible journey to re-imagine Superman.

Also included on these versions is Planet Krypton, the world‘s first exploration of Krypton and its lost society.