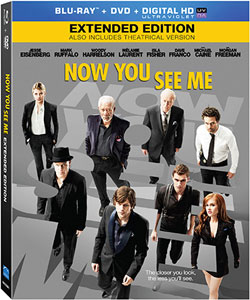 Now You See Me is a daring thriller in which a group of daring illusionists use their skills to their advantage, which arrives in September on Blu-Ray and DVD from Lionsgate Home Entertainment.

The Four Horsemen, a magic super-group led by the charismatic J. Daniel Atlas (Jesse Eisenberg), perform a pair of high-tech, high-profile magic shows. First amazing audiences by remotely robbing a Paris bank while in Las Vegas, and then exposing a white-collar criminal and funneling his millions into the audience members“ bank accounts, baffling the authorities. FBI Special Agent Dylan Rhodes (Mark Ruffalo) is determined to make the magicians pay for their crimes””and to stop them before they pull off what promises to be an even more audacious heist. But he’s forced to partner with Alma (MÃ©lanie Laurent), an Interpol detective about whom he is instantly suspicious. Out of desperation, he turns to a famed magic debunker, who claims the Paris bank trick was actually a meticulously planned illusion. Dylan and Alma begin to wonder if the Horsemen have an outside point person. If so, finding him (or her) would be the key to ending the magicians” crime spree. But who could it be? Or”¦could it really be”¦magic?

The DVD version of the film features an Audio Commentary with Producer Bobby Cohen and Director Louis Leterrier, as well as the Featurette “Now You See Me Revealed” as bonus materials.

The Blu-Ray version fares a bit better, offering up the same Commentary Track and Featurette as well as an Extended Director‘s Cut with 16 Minutes of Never-Before-Seen Footage, a selection of Deleted Scenes and the Featurette ”A Brief History of Magic”.