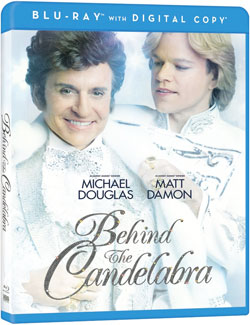 HBO Entertainment has just added Behind the Candelabra, a biopic starring Michael Douglas and Matt Damon, about Liberace, that takes a look at the flamboyant entertainer’s private world, focusing on his tempestuous relationship with Scott Thorson, his young live-in lover for five years.

Before Elvis, before Elton John, Madonna and Lady Gaga, there was Liberace: virtuoso pianist, outrageous entertainer and flamboyant star of stage and television. A name synonymous with showmanship, extravagance and candelabras, he was a world-renowned performer with a flair that endeared him to his audiences and created a loyal fan base spanning his 40-year career. Liberace lived lavishly and embraced a lifestyle of excess both on and off stage. In summer 1977, handsome young stranger Scott Thorson walked into his dressing room and, despite their age difference and seemingly different worlds, the two embarked on a secretive five-year love affair. Behind the Candelabra captures the essence of Liberace’s appeal, while reminding viewers how different attitudes were at the time, as he and his management fiercely protected his public persona.

It will also include “The Making of Behind the Candelabra” which explores the legacy of Liberace through costumes, sets, locations, and prosthetics with several cast and the crew members including Michael Douglas and Matt Damon.