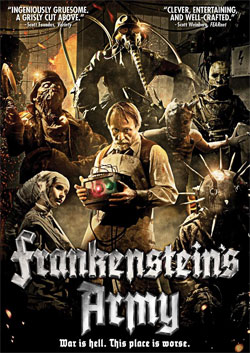 In the dying days of World War II, a battalion of Russian soldiers find themselves lost in enemy territory in eastern Germany. One soldier (Alexander Mercury, The Golden Compass) has been ordered to make a propaganda film as the squadron makes its way across the wintry landscape, and what follows is a thrilling mix of found-footage shocks and classic horror. Stumbling upon a village decimated by an unseen terror, the Russians are lured into the secret lab of deranged scientist Viktor (Hellboy’s Karel Roden). Viktor has unearthed the journals of the legendary Dr. Victor Frankenstein and has used them to assemble an army of supersoldiers stitched together from the body parts of fallen Germans – a desperate Hitler’s last ghastly ploy to escape defeat.

The release will include a number of bonus materials, such as a 30-minute Making-Of Featurette revealing all facets of the filmmaking process, uncovering everything from Richard Raaphorst’s creature designs, to the film’s pre-production process, to the actual creature creation by the Unreal FX team.Â