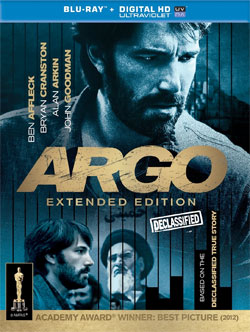 On November 4, 1979, as the Iranian revolution reaches its boiling point, militants storm the U.S. Embassy in Tehran, taking 52 Americans hostage. In the midst of the chaos, six Americans manage to slip away and find refuge in the home of Canadian Ambassador Ken Taylor. Knowing it is only a matter of time before the six are found out and likely killed, the Canadian and American governments ask the CIA to intervene. The CIA turns to their top “exfiltration” specialist, Tony Mendez, to come up with a plan to get the six Americans safely out of the country. A plan so incredible, it could only happen in the movies.

Adding 10 minutes of additional footage into the film, “Argo: Extended Edition” will arrive as a special edition that contains all of the bonus materials from the previous release, including the Commentary Track, the Picture-in-picture Video Commentary and the various Featurettes.

In addition, the release also contains a number of new bonus materials, such as the Featurette “Argo Declassified”, showing how Tony Mendez‘s daring operation gets honored as part of the CIA‘s 50th anniversary. There wil lalso be ”Ben Affleck‘s Balancing Act”, looking at how the filmmakers balanced humor, politics, Hollywood and international intrigue. In ”Argo F*ck Yourself” Ben Affleck leads an all-star review of Argo‘s classic line.

Further, this release will include collectible premiums of a one-sheet poster, map of Tehran, reproduction of Tony Mendez‘s CIA ID card, and a 40-page book with behind-the-scenes photos, production notes, cast bios and more.