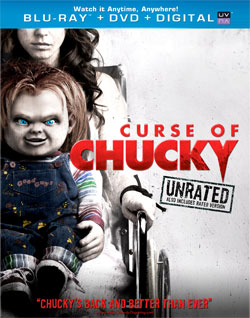 Universal Home Entertainment has added the latest installment in the “Chucky” franchise to their roster, bringing Curse of Chucky to Blu-Ray Disc in October.

He’s back! From the filmmakers that brought you Chucky comes the terrifying return of the pint-sized doll possessed by the spirit of a notorious serial killer. When a mysterious package arrives at the house of Nica (Fiona Dourif, True Blood), she doesn’t give it much thought. However, after her mother’s mysterious death, Nica begins to suspect that the talking, red-haired doll her visiting niece has been playing with may be the key to the ensuing bloodshed and chaos. The return of America’s favorite toy, voiced again by Brad Dourif, is unrated and full of more blood-splattered thrills and chills.

Arriving as a Blu-Ray/DVD combo pack, the release will dish out a 1080p high definition transfer of the movie, along with a DTS 5.1 HD Master Audio track.

The release contains a Commentary Track with Director Don Mancini, Puppeteer Tony Gardner and Star Fiona Dourif, as well as a Gag Reel and a selection of Deleted Scenes.

Playing with Dolls is a Making-of featurette that takes you from scripting, to casting to the shooting of the film, proving that playing with dolls is definitely not child‘s play.

Also included is Living Doll, a featurette about bringing Chucky to life. It shows the pain-staking detail involved with bringing Chucky to life and the army of people behind the process. Voodoo Doll is a look at the Chuck legacy. More than six films and a quarter of a century, Chucky, the possessed Good Guys doll, has been the playmate we love to hate.Â  This featurette looks at why we‘re still frightened by the red haired terror and recalls some favorite moments from the previous films.

The release is rounded out by Storyboard Comparisons.

“Curse of Chucky” will be in stores on October 8 and can be yours for $34.98 as the Blu-Ray/DVD combo that also includes a Digital Copy and an Ultraviolet version of the film, or for $29.98 on DVD.