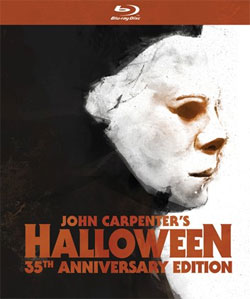 More cool news for John Carpenter fans just came in, as Anchor Bay Entertainment is readying a 35th Anniversary Edition of the director‘s seminal film, Halloween, ready to hit stores in September with a brand-new high definition transfer supervised by the film’s cinematographer Dean Cundey, and an all new DTS 7.1 Master Audio track.

“Halloween” stars Jamie Lee Curtis in her debut role. Anyone who‘s ever watched a horror film in the last 35 years knows the story of Michael Myers, who as a child, butchered his sister with a kitchen knife. Committed to a mental institution and watched over by Dr. Loomis (Donald Pleasance), he engineers his escape 15 years later, returning to his hometown of Haddonfield, Illinois on Halloween night to terrorize anyone who gets in his way, including babysitter Laurie Strode (Curtis).

Over the past 20 years, Anchor Bay Entertainment has created a number of versions for this film but this brand new version will contain a feature that will all fans of the movie want to pick up this one because for the first time, you will receive a Commentary Track featuring not only writer/director John Carpenter but also the film‘s star, Jamie Lee Curtis, recorded brand new just for this release!

And if that is not enough for you to give the release a closer look, perhaps the brand new Featurette “The Night She Came Home” will do the trick, as it also features non other than Jamie Lee Curtis herself.

Other bonus materials on the release will include On Location, as well as a selection of the movie‘s
Trailers along with TV & Radio Spots and Additional Scenes from the film‘s TV Version.

Available in a collectible limited-edition book-style package that will be available only for the first printing, with a 20-page Booklet that contains Archival Photos, an Essay by Halloween historian Stef Hutchinson and specially commissioned cover art by Jay Shaw, this release is definitely on our hotlist to watch out for.

The “Halloween: 35th Anniversary Edition will be available on September 24 for $34.99.