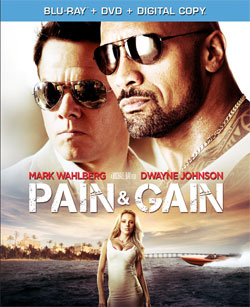 Based on an unbelievable true story, “Pain & Gain” stars Mark Wahlberg, Dwayne Johnson and Anthony Mackie as a group of personal trainers in 1990s Miami who, in pursuit of the American Dream, get caught up in a criminal enterprise that goes horribly wrong.

The DVD version will feature an anamorphic widescreen transfer of the movie with Dolby Digital 5.1 audio, while the Blu-Ray version offers up the film in 1080p high definition, along with an English 7.1 Dolby TrueHD audio track and an assortment of Dolby Digital 5.1 foreign language tracks. It will also include an UltraViolet version and a Digital Copy of the film.

According to Paramount‘s announcement so far, the release will not contain any bonus materials. It will be in stores on August 27 for $29.99 on DVD and $39.99 for the Blu-Ray/DVD combo.