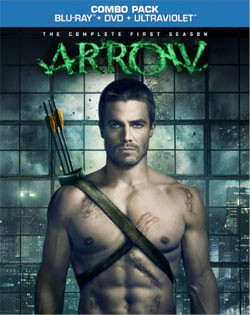 Based on the iconic DC Comics character, Arrow, a modern-day re-imagining of the superhero for television, will be released on DVD and Blu-ray by Warner Home Entertainment later this year.

After being marooned for five years on a remote island, billionaire Oliver Queen (Stephen Amell) returns home with a mysterious agenda and a lethal set of new skills that he uses in a war on crime in this hard-hitting action series.Â  Reinventing the DC Comics character for a modern-day audience, Arrow is not a super hero ”¦ but a hero, every bit as dangerous as the criminals he‘s hunting.

The release will contain a Gag Reel and a selection of Deleted Scenes, along with the Documentary Arrow Comes Alive!, which explains how Greg Berlanti, Marc Guggenheim and Andrew Kreisberg created ”Arrow,” with its solid nod toward the roots of the famous DC Comics character.Â  These creative forces, along with their stellar cast, will guide this documentary, as they describe their modern update of the Green Arrow for a television audience.

Also included is Fight School/Stunt School, a featurette that takes a look at the expertly choreographed fights and stunts that give feature films a run for their money.