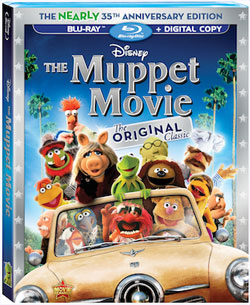 Walt Disney Home Entertainment has just announced that the original Muppet Movie will be celebrating its 35th Anniversary this summer as a Special Edition on Blu-Ray Disc.

See how the Muppets began, with in the original classic that started it all ”” “The Muppet Movie, ” produced by the cultural icon and Muppet creator himself, Jim Henson!Â  Witness the hilarious origins of everyone‘s favorite Muppets – Kermit the Frog, Fozzie Bear, Miss Piggy, Gonzo, Animal, and the rest””as they embark on an inspirational and laugh-filled road trip to follow their Hollywood dreams.Â  And now for the first time, you and your family can see the Muppets make the “rainbow connection” in vibrant high definition.

Apart from a 1080p high definition presentation of the movie itself with a Dolby Digital HD audio track, the release will also include a Disney Intermission, along with new and Never-Before-Seen/Shared Content.