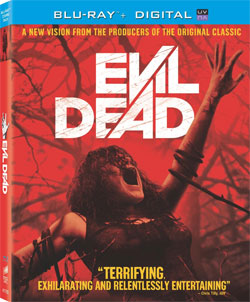 Sony Pictures Home Entertainment has just unveiled details about the upcoming release of the Evil Dead remake, scheduling the DVD and Blu-Ray Disc for July.

A secluded cabin. An ancient curse. An unrelenting evil. The original producers reunite to present a genuinely terrifying re-imagining of their original horror masterpiece. Five young friends have found the mysterious and fiercely powerful Book of the Dead. Unable to resist its temptation, they release a violent demon on a blood-thirsty quest to possess them all. Who will be left to fight for their survival and defeat this unearthly force of murderous carnage?

The DVD Version will contain the Featurettes Making Life Difficult, Being Mia and Directing The Dead, offering up a look behind the scenes as it covers the making of the film and its tribulations.

The Blu-Ray version will contain the same three featurettes, but spice it up with two more Featurettes, named Unleashing The Evil Force, which explores the origins and design of the new “Book of the Dead,” and Evil Dead the Reboot giving you a look at the cast rehearsals, Bruce Campbell, Deadites and more!