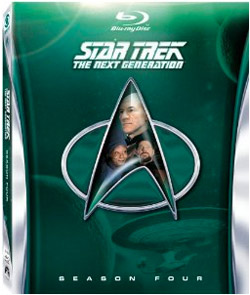 Paramount Home Entertainment has announced Star Trek: The Next Generation: The Fourth Season to be released on Blu-Ray Disc in July.

From the season premiere – the epic conclusion of the two-part cliffhangerÂ “The Best Of Both Worlds” – to its thrilling finale “Redemption” Part 1, “Star Trek: The Next Generation: The Fourth Season” is distinguished as one of the most favored amongst fans.

In addition to All-new Commentary Tracks on select episodes with some of the franchise‘s biggest names including writers Ronald D. Moore and Brannon Braga, and directorÂ Rob Bowman, the collection also includes Brand New Special Features exclusive to the release including Never-before-released Deleted Scenes.

With RELATIVITY: The Family Saga of Star Trek ”“ The Next Generation, fans will uncover special insight into particular challenges facing the production of the fourth season.Â  This Multi-part Documentary focuses on the series‘ evolution after its critically acclaimed third season turned the show into a crossover hit, while also giving viewers a special look into the personal relationships and family bonds of the crew of the Enterprise with key episodes such as “Reunion” and “Brothers.”

“Star Trek: The Next Generation: The Fourth Season” features all 26 episodes of the fourth season, newly remastered into 1080p high definition and will be in stores on July 30 for $130. If you preorder the 6-disc Blu-Ray set on Amazon now, you can actually get it for only $90.99