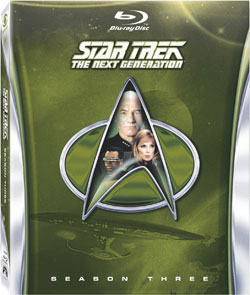 Paramount Home Entertainment has just announced that they will be releasing Star Trek: The Next Generation – The Third Season on Blu-Ray Disc in April.

The release will arrive as a 6-Disc Blu-Ray set, featuring all 26 episodes of the show‘s third season in 1080p high definition with DTS 7.1 HD Master Audio tracks. Boasting an unprecedented reunion of Next Generation writers moderated by comedian and Star Trek fan Seth MacFarlane, this third season collection features an all-new Featurette entitled “Inside The Writer‘s Room.”Â  Including fascinating discussion on the creation of the show‘s acclaimed third season by some of today‘s most visionary science fiction television writers, MacFarlane leads a panel that includes Ronald Moore, Brannon Braga, Naren Shankar and Rene Echevarria.

Plus, the collection is highlighted by an entirely new Multi-part Documentary entitled “Resistance is Futile ”“ Assimilating Star Trek: The Next Generation,” which reveals behind-the-scenes insight on the making of Season Three.

Also included is a special Tribute to Michael Piller, including never-before-seen interviews with cast, crew, family members and industry colleagues who all discuss his lasting influence not only on the series, but also on the Star Trek franchise as a whole.Â  Rounding out the exclusive bonus material includes a new Gag Reel and newly produced Commentary Tracks on select episodes.

Nicely overhauled in space dock, it seems, Star Trek: The Next Generation – The Third Season will arrive in stores on April 30 for $129.99.