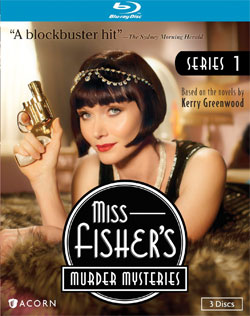 Based on the popular detective novels by Kerry Greenwood, the gorgeously costumed and evocatively shot “Miss Fisher‘s Murder Mysteries, Series 1” features Essie Davis as the Honorable Miss Phryne Fisher, a thoroughly modern woman of the late 1920s operating in a mostly male world. The glamorous “lady detective” goes about her work with a pistol close at hand””and, more often than not, a male admirer even closer.

Produced for ABC Australia and filmed on location in Melbourne with stellar production values, “Miss Fisher‘s Murder Mysteries” arrives as a 3-disc Blu-Ray set and a 4-disc DVD set that include all 13 episodes, plus a Bonus Behind-the-Scenes Featurette, Meet the Creators, Set Tour, and Cast Interviews.