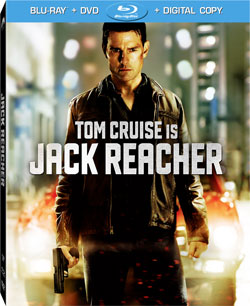 Paramount Home Entertainment has just added Jack Reacher to their line-up, scheduling the release of this intense thriller on Blu-Ray Disc and DVD in May.

Ex-military investigator Jack Reacher (Tom Cruise) leaps off the pages of Lee Child’s bestselling novel and onto the big screen in the explosive thriller the critics are calling “taut, muscular, gruff and cool.” When an unspeakable crime is committed, all evidence points to the suspect in custody who offers up a single note in defense: “Get Jack Reacher!” The law has its limits, but Reacher does not when his fight for the truth pits him against an unexpected enemy with a skill for violence and a secret to keep.

The release will feature a 1080p high definition transfer with DTS 7.1 HD Master Audio track on Blu-Ray. As extras you will find a Commentary Track by Tom Cruise and director Christopher McQuarrie on the disc also. Further, there is a second Commentary Track featuring composer Joe Kraemer, along with the Featurettes When the Man Comes Around, You Do Not Mess with Jack Reacher: Combat & Weapons and The Reacher Phenomenon.

The DVD version will contain only the feature film itself without any bonus materials.