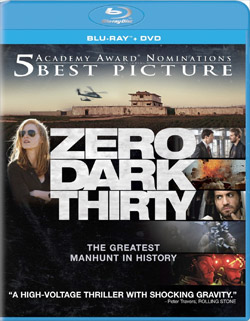 Sony Pictures Home Entertainment has added the Academy-Award nominated Zero Dark Thirty to their release line-up, scheduling a Blu-Ray and DVD version of the film in March.

For a decade, an elite team of intelligence operatives, working in secret across the globe, devoted themselves to a single goal: to find and eliminate Osama bin Laden. “Zero Dark Thirty” reunites the OscarÂ® winning team of The Hurt Locker, director-producer Kathryn Bigelow and writer-producer Mark Boal, along with producer Megan Ellison, telling the story of history’s greatest manhunt for the world’s most dangerous man.

The Blu-ray Combo Pack and DVD include four Featurettes, entitled No Small Feat, The Compound, Targeting Jessica Chastain, and Geared Up, which all provide an in-depth look at the filmmaking process, documenting the great lengths to which cast, crew and filmmakers went to portray the hunt.