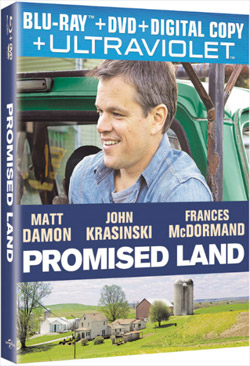 Universal Home Entertainment has added Promised Land to their release roster, bringing a Blu-Ray/DVD combo and DVD version to stores in April.

Corporate salesman Steve Butler (Matt Damon) has been dispatched to the rural town of McKinley with his sales partner (Frances McDormand) to offer much-needed relief to the economically hard-hit residents in exchange for drilling rights to their properties. What seems like an easy job for the duo quickly becomes complicated by a respected schoolteacher (Hal Holbrook), a slick environmental activist (John Krasinski), and Steve’s interest in a local woman (Rosemarie DeWitt). As they grapple with a surprising array of both open hearts and closed doors, the outsiders soon discover the strength of an American small town at a crossroads.

The Blu-Ray version will feature a 1080p high definition transfer of the film, with DTS 5.1 HD Master audio. As extras you will find an Extended Scene on the release, as well as the Featurette The Making of Promised Land. A Digital Copy and an UltraViolet version of the film will also be included, along with a DVD containing a standard definition version of the film.

The DVD version features a widescreen transfer of the film with Dolby Digital 5.1 audio, as well as the Extended Scene and the Making Of Featurette.