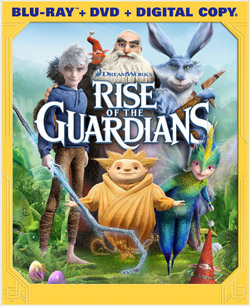 DreamWorks Animation and Paramount Home Entertainment have just announced the upcoming release of the animated feature film Rise of the Guardians, scheduled to make it to stores in March.

“Rise of the Guardians” is the fun-filled and magical story about the legendary guardians””Jack Frost, the Easter Bunny, Santa Claus, the Tooth Fairy and Sandman – together for the first time!Â  When the evil Pitch threatens to take over the world, it‘s up to our beloved heroes to protect the hopes and dreams of children everywhere.Â

The DVD version will feature the film in anamorphic widescreen with a number of bonus features, such as a Commentary Track with director Peter Ramsey and producers Christina Steinberg and Nancy Bernstein, the featurette Dreamers and Believers, giving you a look at the cast and characters of the movie, and the interactive feature Sandy‘s Dream Guide, in which Sandman helps interpret your dreams.

The Blu-Ray version, featuring a 1080p high def transfer and DTS 7.1 HD Master Audio arrives as a 3-disc set, featuring the movie, the DVD version and a Digital Copy. Further, the release will include the bonus materials from the DVD version, along the interactive games Jack Frost Snowball Showdown! and Rock, Paper, Scissors with Sandy.

The multi-part featurette Behind the Magic will also be part of the release, allowing you to explore the filmmakers‘ journey to create Rise of the Guardians‘ enthralling look, characters, effects and music, in segments called Dreaming Up the Look, Naughty & Nice: Designing Memorable Characters, Enchanting Effects and Creating an Epic Score.

In the featurette The Man Behind the Guardians you will learn how DreamWorks Animation worked with author William Joyce to bring his novels to life.