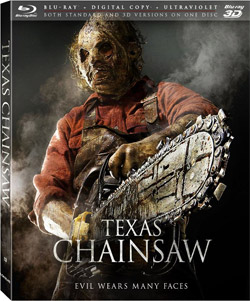 Lionsgate Home Entertainment has just unveiled information about the upcoming Blu-Ray Disc and DVD release of Texas Chainsaw, the frightening follow-up to the iconic horror phenomenon, scheduling the release for May.

“Texas Chainsaw” continues the legendary story of the homicidal Sawyer family, picking up where Tobe Hooper‘s 1974 horror classic left off.Â  In Newt, Texas, people have been going missing without a trace for decades.Â  Years later and hundreds of miles away from the original massacre, a young girl, Heather (Alexandra Daddario), discovers that she has inherited a sprawling Texas estate from an unknown grandmother.Â  To claim her estate, Heather goes on a road trip with her friends to Newt, but learns that wealth comes at a price when she discovers the horror that waits in the cellar of her new mansion.

The release will be packed with bonus materials, such as a Commentary Track by producer Carl Mazzocone and filmmaker Tobe Hooper. A Special “Chainsaw Alumni” Audio Commentary will also be included, featuring stars Bill Moseley, Gunnar Hansen, Marilyn Burns and John Dugan.

Also found on the release is the Featurette Texas Chainsaw Legacy, giving you a look back at the history and 40 year legacy of the Texas Chainsaw Massacre series with filmmaker Tobe Hooper.

Next up is ”Resurrecting The Saw”, a look at the development of “Texas Chainsaw” with Director John Luessenhop, Producer Carl Mazzocone and Writers Adam Marcus, Debra Sullivan, Kirsten Elms and Stephen Susco. Also included is ”The Old Homestead”, a featurette offering up a detailed look at the re-creation of the shooting location from the original Texas Chainsaw Massacre with Production Designer William A. Elliott and cast members (and Chainsaw series alumni) Bill Moseley, Gunnar Hansen, Marilyn Burns and John Dugan.

”Casting Terror” is an interview featurette with the cast including Alexandra Daddario, Trey Songz, Tania Reynolds, Keram Malicki-Sanchez, Kyle Eastwood, Sean Sipos and others, while ”Leatherface 2013” features an interview with Leatherface actor Dan Yeager on his interpretation of this legendary role, along with a look at the creation of Leatherface‘s costume, mask and signature chainsaw.

Then there is ”Lights, Camera, Mayhem” a featurette on the subject of the film‘s 3D photography with Director of Photography Anastas Michos along with a look at the creation of several sequences from the film, while ”It‘s in the Meat” will cover the film‘s grisly special make-up effects with Make-Up Effects Supervisor Robert Kurtzman, and Make-Up ArtistsÂ  Alex Diaz and Mike McCarty.

But that‘s not all. Also look for On-Set Short Subjects: Five Minute Massacres, featuring Burning Down The House, Trapped in the Van, Carnival Time, Leatherface In Action, Hot Times In Louisiana and Bloody Good Times.

“Texas Chainsaw” will arrive on May 14 and can be yours for $39.99 on Blu-Ray Disc and $29.95 on DVD. Both version will include a Digital Copy and UltraViolet version of the film also.