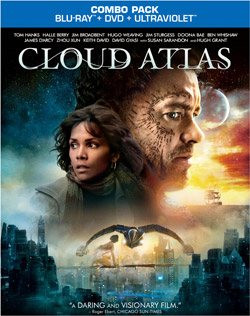 Warner Home Video has just announced details about the upcoming release of Cloud Atlas, scheduled to arrive on Blu-Ray Disc and DVD in May.

From acclaimed filmmakers Lana Wachowski, Tom Tykwer, and Andy Wachowski, the powerful and inspiring epic drama “Cloud Atlas” explores how the actions and consequences of individual lives impact one another throughout the past, the present and the future.
Â
Action, mystery and romance weave dramatically through the story as one soul is shaped from a killer into a hero, and a single act of kindness ripples across centuries to inspire a revolution in the distant future.

Featuring an anamorphic widescreen transfer with Dolby Digital 51. audio, the DVD version of the movie will also include the Featurette Â  A Film Like No Other as its sole bonus feature.

The Blu-Ray version, offering up a 1080p high definition transfer with high definition audio, will contain a good number of additional supplements, including the Featurette A Film Like No Other, as well as Everything is Connected, The Impossible Adaptation, The Essence of Acting, Spaceships, Slaves and Sextets, The Bold Science Fiction of Cloud Atlas and Eternal Recurrence: Love, Life, and Longing in Cloud Atlas.