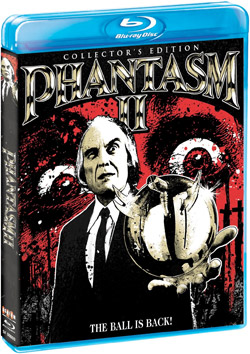 The Tall Man is back with a vengeance in Phantasm II, the second chapter in the cult classic Phantasm series!
”¨”¨Released after seven years in a mental hospital, Mike convinces his old pal Reggie to join forces with him to hunt down and destroy The Tall Man once and for all. Mike’s visions lead the two to a quiet little town where a horde of flying killer balls aim to slice and dice their gruesome way through everyone.
”¨
The release features a 1080p high definition transfer, supplemented by a DTS 5.1 HD Master Audio track. Filled to the brim with extras, you will also find a Commentary Track with director/writer Don Coscarelli and actors Angus Scrimm and Reggie BanisterÂ on the disc.

Also included on the release is the Documentary “The Ball is Back!” featuring new interviews with writer/director Don Coscarelli, actors Reggie Banister, Angus Scrimm, Paula Irvine, Samantha Phillips and more!

But also the Vintage Behind the Scenes Footage about the movie will be included, covering Makeup Effects, and On the Set. The Featurette “The Gory Days with Greg Nicotero” is also part of the release, along with Deleted Scenes from archival film elements from Don Coscarelli‘s archive and Additional Scenes, alternate takes and deleted gore footage from the workprint.

The release is rounded out by a Rare Short Film starring Rory Guy (aka Angus Scrimm) as Abraham Lincoln, various Still Galleries and a collection of Phantasm Trailers and TV Spots.
”¨
“Phantasm II” will arrive in all of its glory on March 5 for $29.93.
”¨