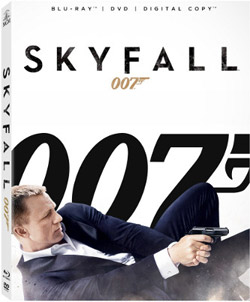 The 23rd installment in the James Bond franchise has just been announced by 20th Century Fox Home Entertainment , as Skyfall will arrive on DVD and Blu-Ray Disc in February.

In “Skyfall” Bond‘s loyalty to M (Judi Dench) is tested as her past returns to haunt her. With MI6 now compromised from both inside and out, M is left with one ally she can trust: Bond. 007 takes to the shadows ”“ aided only by field agent, Eve (Naomie Harris) ”“ following a trail to the mysterious Silva (Javier Bardem), whose lethal and hidden motives have yet to reveal themselves.

The DVD version will contain the multi-part featurette Shooting Bond that covers things such as ”The Title Sequence,” “DB5,” “Women” and ”Locations”.

The Blu-Ray version will pack a whole lot more punch, not only with its 1080p high def transfer and DTS 7.1 HD Master Audio Track, but also in terms of the bonus materials. Here you can go behind-the-scenes of Bond‘s latest mission with more than three hours of in-depth special features. Shooting Bond brings adrenaline-hungry fans closer to the heart-stopping action and 007‘s world of worthy villains, glamorous women, exotic locations and the coolest gadgets. Apart from these Fourteen different Featurettes, the release will also include footage form the movie’s Premiere and Two Commentary Tracks. The first one features Director Sam Mendes, while the second one is host to Producers Michael G. Wilson & Barbara Broccoli and Production Designer Dennis Gassner.