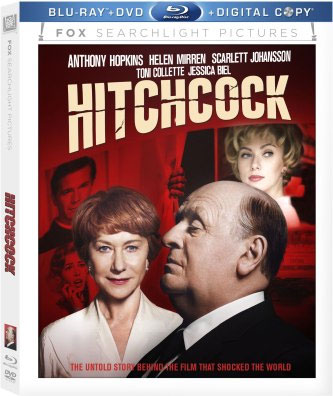 Plagued by both a reckless ego and nagging self-doubt, Hollywood legend Alfred Hitchcock (Anthony Hopkins) becomes obsessed with a grisly murder story that the studios won‘t back. Determined, he risks his reputation, his home and even the love of his wife Alma (Helen Mirren), as he sets out to make the film. Ultimately, Hitch wins Alma over, and the two collaborate to create an enduring masterpiece ”“ Psycho.

The Blu-Ray version of “Hitchcock” will be host to a number of extras, including a Deleted Scene and a series of Featurettes, such as Becoming the Master: From Hopkins to Hitchcock, Obsessed with Hitchcock, along with looks at The Story, The Cast, Hitch and Alma, Remembering Hitchcock and others.

Other highlights are Sacha Gervasi’s Behind the Scenes Cell Phone Footage and a closer look at composer Danny Elfman and his work on the movie.

A Commentary Track with Sacha Gervasi and Stephen Rebello is also included.