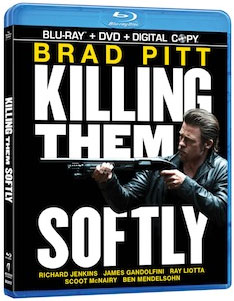 Anchor Bay Entertainment has just unveiled details about the upcoming release of the thriller Killing Them Softly, slated for a Blu-Ray/DVD combo release in March.

The release features a 1080p high definition transfer with a DTS 5.1 HD Master Audio track. As extras you will find a selection of Deleted Scenes and The Making of Killing Them Softly on the disc, along with a Digital Copy.