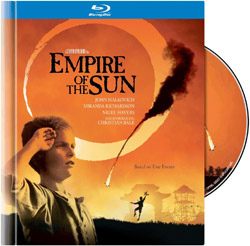 Warner Home Video has released information about the upcoming Blu-Ray release of Empire Of The Sun, scheduled to appear in stores in November.

Based on J. G. Ballard’s autobiographical novel, “Empire of the Sun” tells the story of a young English boy, James Graham (Christian Bale), whose privileged life is upturned by the Japanese invasion of Shanghai on December 8, 1941. Separated from his parents, he is eventually captured, and taken to Soo Chow confinement camp, next to a captured Chinese airfield. Amidst the sickness and food shortages in the camp, Jim attempts to reconstruct his former life, all the while bringing spirit and dignity to those around him.

Releasing the film as a Blu-Ray Book to celebrate the movie‘s 25th Anniversary, Warner will present it in 108p high definition, along with a 36-page booklet.

The release will also contain the Documentary ”The China Odyssey,” which takes you behind the scenes during the making of the movie.

In addition, Warner at War will be included, a documentary on how Warner Bros. uses the movies to prepare the US for war and to keep up morale on the home front during WWII. This documentary is narrated by Steven Spielberg.