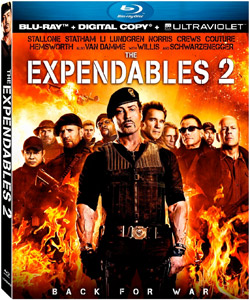 Lionsgate Home Entertainment has announced the upcoming release of the action powerhouse The Expendables 2, scheduled for release on DVD and Blu-Ray Disc in November.

“The Expendables” are back and this time it is personal! The biggest action-adventure superstars from around the world reunite in the next chapter ofÂ “The Expendables”Â franchise, as co-screenwriter and star Sylvester Stallone, takes fans on another intense adventure with his rogue team of misfits. Reunited for what they think should be a quick, in-and-out mission, this tight-knit band of old-school mercenaries are about to find themselves at the brink of global disaster and are driven to make this mission personal.

The release will include an Audio Commentary with director Simon West, as well as a Gag Reel and Deleted Scenes. Further you will find a series of Behind-the-scenes Featurettes on the disc, along with a Digital Copy on both the DVD and Blu-Ray version.