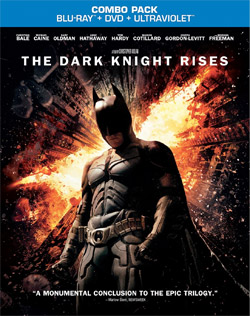 Warner Home Video has released information about the upcoming Blu-Ray version of The Dark Knight Rises, scheduled to appear in December.

“The Dark Knight Rises” is the epic conclusion to filmmaker Christopher Nolan’s Dark Knight trilogy. It has been eight years since Batman vanished into the night, turning, in that instant, from hero to fugitive. Assuming the blame for the death of D.A. Harvey Dent, the Dark Knight sacrificed everything for what he and Commissioner Gordon both hoped was the greater good. For a time the lie worked, as criminal activity in Gotham City was crushed under the weight of the anti-crime Dent Act. But everything will change with the arrival of a cunning cat burglar with a mysterious agenda. Far more dangerous, however, is the emergence of Bane, a masked terrorist whose ruthless plans for Gotham drive Bruce out of his self-imposed exile. But even if he dons the cape and cowl again, Batman may be no match for Bane.

The release features a 1080p high definition transfer, complemented by a DTS 7.1 HD Master Audio track. Among the extras on the release you will find Warner‘s obligatory Maximum Movie Mode, video commentary track that takes you behind the scenes of the making of the film while you watch it, as well as the Featurette ”Ending The Knight”, in which director Christopher Nolan talks about the creation of the final film in the trilogy.

Also included is The Batmobile, a featurette in which you get to witness all five Batmobiles together for the first time, along with close-up looks of the features and details.

The release will contain a number of other bonus materials also, most of which have not yet been disclosed.

You can own The Dark Knight Rises as a Blu-Ray/DVD combo that also includes an UltraViolet version of the film when it hits stores on December 4 for $35.99. If you want to see a little more of the release, check out this clip.