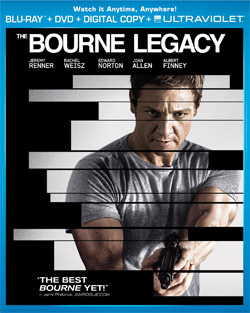 Universal Home Entertainment has just announced the upcoming release of The Bourne Legacy, scheduled to hit DVD and Blu-Ray Disc in December.

“The Bourne Legacy” takes the action-packed Bourne series to an explosive new level. On the verge of having their conspiracy exposed, members of the government‘s intelligence community will stop at nothing to erase all evidence of their top secret programs ”“ even the agents involved. Aaron Cross (Jeremy Renner) must use his genetically-engineered skills to survive the ultimate game of cat-and-mouse and finish what Jason Bourne started.

Also included on the release are the Featurettes ”Re-Bourne” and Capturing Chaos: The Motorbike Chase”.

On the Blu-Ray version, a 1080p high definition presentation awaits you with a DTS 7.1 HD Master Audio track. Packed with bonus materials, you will also find the Commentary Track on the release, along with the Featurettes ”Re-Bourne,” “Enter Aaron Cross,” “Crossing Continents: Legacy on Location,” “Man vs. Wolf,” “Wolf Sequence Test,” “Moving Targets: Aaron and Marta” and “Capturing Chaos: The Motorbike Chase”.

The release also contains a Digital Copy and UltraViolet version of the film.