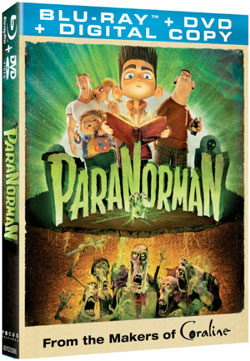 Universal Home Entertainment has just announced the upcoming release of the stop-motion animated movie ParaNorman, scheduled to arrive on DVD and Blu-Ray Disc in late November.

From the makers of Coraline comes the story of Norman, a boy who must use his ability to see and speak with the dead to save his town from a centuries-old curse. In addition to spooky zombies, he‘ll also have to take on mysterious ghosts, wily witches and, worst, of all, clueless grown-ups. But this young ghoul whisperer will soon find his paranormal abilities pushed to their otherworldly limits.

AS extras you will find a Commentary Track with Writer/Director Chris Butler and Director Sam Fell on the DVD version, as well as a collection of Preliminary Animatic Sequences, the Behind-the-scenes Featurette ”Peering Through the Veil” and some additional Featurettes.

On the Blu-Ray releases you will also find a Picture-in-Picture Video Commentary as well as Universal‘s My Scenes and pocket BLU App features.