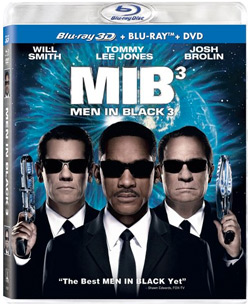 Sony Pictures Home Entertainment has just announced the upcoming release of Men In Black 3 on DVD and Blu-Ray Disc, bringing the latest installment in the franchise to your living room in November.

Agents J [Will Smith] and K [Tommy Lee Jones] are back… in time. J has seen some inexplicable things in his 15 years with the Men in Black, but nothing, not even aliens, perplexes him as much as his wry, reticent partner. But when K‘s life and the fate of the planet are put at stake, Agent J will have to travel back in time to put things right. J discovers that there are secrets to the universe that K never told him – secrets that will reveal themselves as he teams up with the young Agent K [Josh Brolin] to save his partner, the agency and the future of humankind.

Arriving as a Blu-Ray/DVD Combo Pack, the release will feature the movie in high definition and standard definition, as well as an Ultraviolet copy.

There will be a number of bonus materials on the release, such as the Spot the Alien Game and the Documentary ”The Making of Men In Black 3”. Also look out for the Featurettes ”Men In Black: 1960‘s vs. Today” and ”Creating the Visual Effects”.

In addition the release offers up a Scene Investigation and Progression Reels to give you a better look at the making of the film.

The “Back In Time” Music Video by Pitbull and a Gag Reel will round out the release.