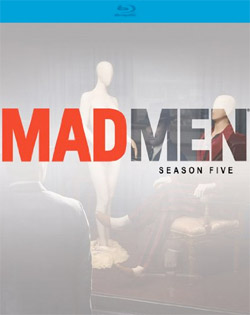 The AMC TV series Mad Men has just received a release date, as Lionsgate Home Entertainment brings the Fifth Season of the acclaimed show to DVD and Blu-Ray Disc in October.

The men and women of Sterling Cooper Draper Pryce are back with all-new drama inside and outside of the office. With still growing ratings, “Mad Men” continues to establish itself as one of the most honored series in television history, winning its fourth consecutive EmmyÂ® for Outstanding Drama Series last year, a milestone achieved by only three other shows in history.

Arriving as a 4-disc DVD set and a 3-disc Blu-Ray set, the release is packed with special features, including Extensive Commentaries and Featurettes examining the time period and culture of the “Mad Men” era.