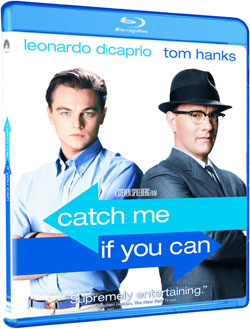 Paramount Home Entertainment has just announced Steven Spielberg‘s Catch Me If You Can to arrive on Blu-Ray Disc for the first time in December.

Inspired by the extraordinary true story of a brilliant young master of deception and the FBI agent hot on his trail, “Catch Me If You Can” follows Frank W. Abagnale, Jr. (Leonardo DiCaprio) as he successfully passes himself off as a pilot, a lawyer and a doctor-all before his 21st birthday!

Featuring a newly remastered 1080p high definition transfer with DTS 5.1 HD Master Audio track, the release will also contain a large number of bonus materials, including a vast array of featurettes, such as Behind the Camera, The Casting of the Film, Scoring, Meet Frank Abagnale and others.

Also included are looks at the characters and actors who played them, in Tom Hanks as “Carl Hanratty”, Frank‘s Parents:Â  Christopher Walken and Nathalie Baye, The Strong Family:Â  Martin Sheen and Amy Adams, Jennifer Garner as “Cheryl Ann” and, of course, Leonardo DiCaprio as “Frank Abagnale.”

A number of other Featurettes will included, shedding light on the production of the movie and all sorts of aspects. The release will be rounded out by a look at the Costume Design and a Photo Gallery.