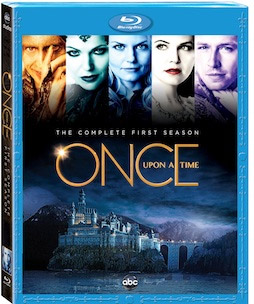 The ABC-TV fantasy show Once Upon A Time arrives on DVD and in high definition later this month, when ABC is releasing the Complete First Season on Blu-Ray Disc.

In “Once Upon A Time” the Evil Queen cast an evil spell on an enchanted forest filled with fairytale characters. The curse trapped these characters in a place where all their happy endings were stolen ”“ our world.Â  Now the Evil Queen is acting as town mayor, and all of the inhabitants of the fairytale
world of Storybrooke can‘t seem to remember any details of their past lives. As the truth starts to unfold, the battle between good and evil begins.

Also included are Deleted Scenes and Bloopers, and a selection of Featurettes, such as “Fairy Tales in the Modern World,” “Building Character,” “Welcome to Storybrooke,” “The Story I Remember”¦ Snow White” and others.

The Blu-Ray version will also include Origins, a,