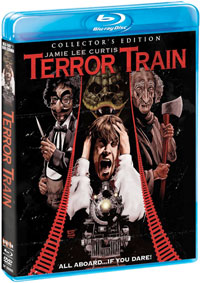 It’s New Year’s Eve and group of college co-eds have planned a masquerade bash aboard a chartered train. What they didn’t plan on was that a knife-wielding psycho would crash the party and begin slaughtering the guests one by one!Â  Who is this brutal costumed killer? Climb aboard the Terror Train for a frightening combination of blood-curdling horror and intriguing mystery.

The film arrives as a Collector‘s Edition Blu-Ray/DVD combo, featuring a 1080p high definition transfer of the film along with a Commentary Track by Director Roger Spottiswoode, a
Still Gallery, the movie‘s Theatrical Trailer And TV Spots and other extras