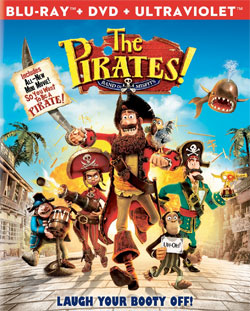 Sony Pictures Home Entertainment has just added the animated movie The Pirates: Band of Misfits to their roster, scheduling the release of the film on DVD and Blu-Ray Disc for August.

Set sail for a fun-filled voyage and hilarious pirate antics with the biggest Band of Misfits on the seven seas! When the infamous Pirate Captain (Hugh Grant) is shunned once again by his rivals Black Bellamy and Cutlass Liz, he sets his sights to win the coveted Pirate of the Year Award! With his trusted dodo, Polly and rag-tag crew at his side, the Pirate Captain will need to battle a diabolical queen, save a young scientist and never lose sight of what a pirate loves best: Adventure!

On the DVD version of the movie you will also find a Commentary Track by Director Peter Lord, Co-Director Jeff Newitt and Editor Justin Krish, as well as the Sort Film ”So You Want To Be A Pirate?”. Mr. Bobo‘s Flash Card Game and Printable Activity Pages will round out the disc.

On the Blu-Ray Disc version you will find the same bonus materials as on the DVD version, but in addition, the release will contain additional Peter Lord Short Films, and the Featurettes, ”From Stop to Motion” and ”Creating the Bath Chase Sequence”. Further the disc will contain a Pirate Disguise Dress-Up Game.

A 3D Blu-Ray Disc of the film will also be available, featuring all of the above features, along wit ha 3D version of the movie.

All versions will further contain an UltraViolet version of the movie for viewing on mobile devices and computers.