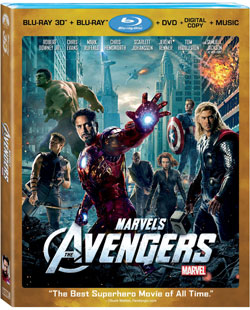 Walt Disney Home Entertainment and Marvel Studios are preparing the mega-blockbuster The Avengers for release on home video this fall.

“Marvel‘s The Avengers” marks the team up of a lifetime, featuring iconic Marvel Super Heroes Iron Man, The Incredible Hulk, Thor, Captain America, Hawkeye and Black Widow. When an unexpected enemy emerges that threatens global safety and security, Nick Fury, Director of the international peacekeeping agency known as S.H.I.E.L.D., finds himself in need of a team to pull the world back from the brink of disaster. Spanning the globe, a daring recruitment effort begins.

On DVD the film will appear as a single-disc version only, featuring the movie, along with a Commentary Track by director Joss Whedon and the Featurette ”Assembling the Ultimate Team”.

Things heat up significantly on Blu-Ray, though, where the film will arrive in a 2-disc set and as a 4-disc set.

The 2-disc Blu-Ray set will feature the film in 1080p high definition with a DTS 7.1 HD Master Audio soundtrack.

In addition you will also find Disney‘s Second Screen feature on the release, along wit hthe Featurettes ”Assembling the Ultimate Team” and ”A Visual Journey”.

Also included is a Gag Reel and a selection of Deleted Scenes, along with the Soundgarden Music Video “Live to Rise”. The DVD version will also be included in this release.