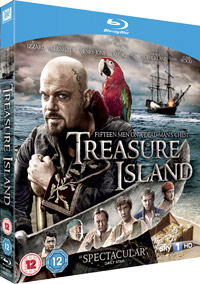 Sonar Entertainment and Vivendi Entertainment have just announced the swashbuckling TV mini-series Treasure Island to make its way to DVD and Blu-Ray Disc in July.

“Treasure Island” follows a young Jim Hawkins (Toby Regbo) as he becomes a part of an action-filled buccaneer adventure. After finding a cryptic drawing, Jim enlists the help of Dr. Livesey (Daniel Mays) and Squire Trelawney (Rupert Penry-Jones) who realize the artifact it is actually a treasure map. Once they discover its hidden purpose, Squire commissions a ship and crew, including hiring the mysterious Long John Silver (Eddie Izzard), to seek the buried riches. Jim sets sail with the crew, he soon learns that things are not as they seem. Squire and Dr. Livesey may have other secret intentions, and meanwhile the crew is planning mutiny over the ship‘s Captain. Now Jim must find out what mystery lies on Treasure Island before it‘s too late.